Bob Fitzsimmons co-authored a recently published article relating to a UCLA study using FDDNP, a molecular tracer, to diagnose chronic traumatic encephalopathy in living military personnel’s brains. FDDNP has been used in examining the brains of many athletes especially football players. The study has shown positive results using FDDNP as a CTE detector; however, larger studies using FDDNP and brain scans in individuals at risk of CTE are needed to confirm the usefulness of FDDNP as a diagnostic tool.

Chronic traumatic encephalopathy, or CTE, is a degenerative brain disease caused by repetitive brain trauma. In CTE, a protein called Tau forms clumps that slowly spread throughout the brain killing brain cells. Individuals who have been diagnosed with CTE posthumously, exhibited symptoms such as depression, confusion, mood swings, forms of dementia and Alzheimer’s disease during their lifetime. Currently, CTE can only be diagnosed posthumously during the examination of the brain tissue. 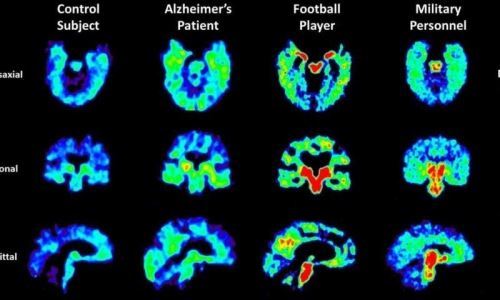 UCLA researchers are studying a molecular tracer, called FDDNP, which binds with tau and amyloid, another abnormal protein to pinpoint the location and amount of abnormal protein in the brain of living individuals. In a previous UCLA study, FDDNP was use to examine the brains of 15 former NFL players with memory and mood problems, which brain examinations showed a similar pattern of abnormal protein distribution seen in autopsy-confirmed CTE cases.

In the current study, UCLA extended the research from the previous study to seven military personnel (five veterans and two in active duty) who had suffered mild traumatic brain injuries and memory or mood complaints. Each military personnel was injected with FDDNP and had a thorough brain scan. The results were compared to the 15 previously studied football players, 24 individuals with Alzheimer’s dementia and 28 individuals without cognitive problems. The distribution pattern of the tracer in the brain scans of the military personnel were similar to the pattern found in the brains of the 15 retired football players in the previous study and were also distinct from the distribution patterns seen in the individuals with Alzheimer’s disease or in the healthy individuals.

You can read more about the article here: https://medicalxpress.com/news/2018-07-molecular-tracer-pet-scan-abnormal.html