Fitzsimmons Law Firm PLLC has filed a wrongful death lawsuit on behalf of the widow and family of a driver who sustained fatal injuries in a trucking accident that occurred in Ohio County, West Virginia. The lawsuit was filed in the Circuit Court of Ohio County, West Virginia against the driver of the tractor trailer as well as the trucking company who maintained the truck and employed and trained the driver. 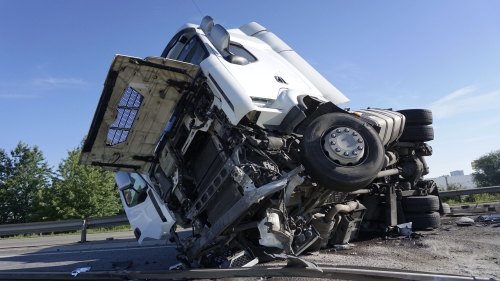 According to the Complaint, the driver of the truck fell asleep while driving at an excessive rate of speed on Interstate 70 and crossed the grassy median into the opposite lane of traffic where he struck the plaintiff's decedent. The Complaint further alleges that the driver of the tractor-trailer acted recklessly and was operating his commercial motor vehicle in excess of the maximum hours of service permitted by federal law thereby violating applicable federal motor carrier safety rules, laws, and regulations. Post-collision investigation revealed that the driver falsified his record of duty status log book and submitted fraudulent entries in an attempt to hide and conceal his illegal and reckless conduct. Driving in excess of the allowable number of house is considered an "imminent hazard" and had the driver been stopped by law enforcement, he would have been ordered out of service immediately and given citations.

The plaintiff also asserts causes of action against the trucking company alleging that it failed to properly inspect and maintain the subject tractor trailer. At the time of the collision, several tires on the truck were excessively worn and dangerously low in violation applicable motor carrier safety regulations. The plaintiff further alleges that the trucking company negligently trained the driver in the safe operation of a commercial motor vehicle; negligently hired, retained and supervised the driver; and negligently entrusted the commercial truck to the subject driver when it was known, or should have been known, that the driver was unfit to operate a commercial motor vehicle.

As a result of the defendants' actions and conduct, the plaintiff's decedent sustained critical and life threating injuries and suffered an amputation to his left leg as well as blunt force trauma.

The plaintiff is seeking all damages permitted under law, including medical bills; funeral, burial, and memorial expenses; the lost wages and benefits of the decedent; lost household services of the decedent; and other wrongful death damages including the loss of the decedent's society, companionship, comfort, guidance, kindly offices, advice, services, protection, care and assistance; and severe and extreme mental anguish and solace suffered by plaintiff's decedent's surviving family members. The plaintiff is also seeking punitive damages against the driver and trucking company alleging that their conduct was done with a conscious, reckless, and outrageous indifference to the health, safety, and welfare of the plaintiff's decedent and other motorists operating vehicles on the roads and highways of West Virginia.

Fitzsimmons Law Firm PLLC is a personal injury plaintiff's litigation firm that represents clients in West Virginia, Ohio, Pennsylvania, and across the country. Fitzsimmons Law Firm has successfully represented clients in a wide variety of cases including wrongful death, product liability, medical malpractice, work related injuries, coal mining accidents, gas field and drilling injuries, chemical and toxic exposure, insurance, and truck and motor vehicle accidents. The Firm has obtained over $1 Billion in verdicts and settlements with over 170 verdicts and settlements in excess of $1 Million.